The function of the canine (K9) team is to enhance the Florence Police Department’s capabilities in the areas of tracking/searches, narcotic investigations, criminal apprehension and evidence searches.  The K9 team is comprised of multiple officers (handlers) and their canine partners.  The handler and canine are trained and certified as a team.  The team trains weekly and participates in a yearly re-certification training.  The K9 team also conducts public demonstrations for various events in the City including the Citizens Police Academy.  These public contacts help the citizens of Florence understand the abilities and purpose of these four-legged officers.  Currently the department has two certified K9's with two more in the process of being purchased and trained.  These additions will prove invaluable in the department's goal to reduce crime in our City. 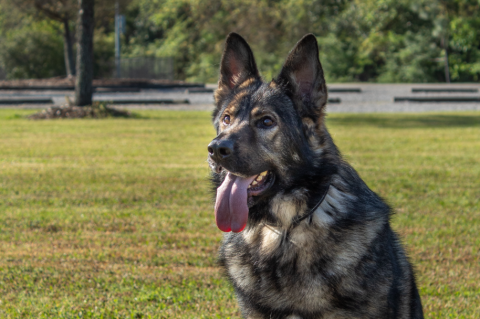 Magnum is a German Shepherd who joined the Police Department in November of 2020.  He is almost 3 years old and is trained and certified in tracking, obedience, article finds and narcotic detection.  Magnum has successfully assisted the department with tracking a murder suspect and an attempted murder suspect along with several narcotic seizures.  Magnum loves to play tug of war with his rubber Kong and rope.

Fun Fact: Magnum was born is Hungary and imported to Holland before coming to America so he has an official passport and obeys Dutch commands. 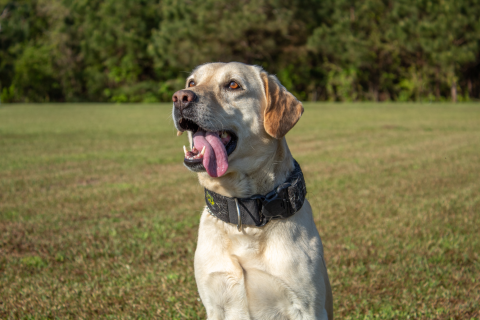 Ares is a 6 year old Labrador who has been with the Police Department for 5 years.  Ares is trained and certified in article searches, tracking, obedience and narcotic detection.  Ares has been used successfully in article finds (items that are dropped or thrown by people) and in narcotic seizures.  Ares loves to play with his tennis ball or Kong rubber toy.

Fun Fact: Ares gets excited when it is time to go to work.