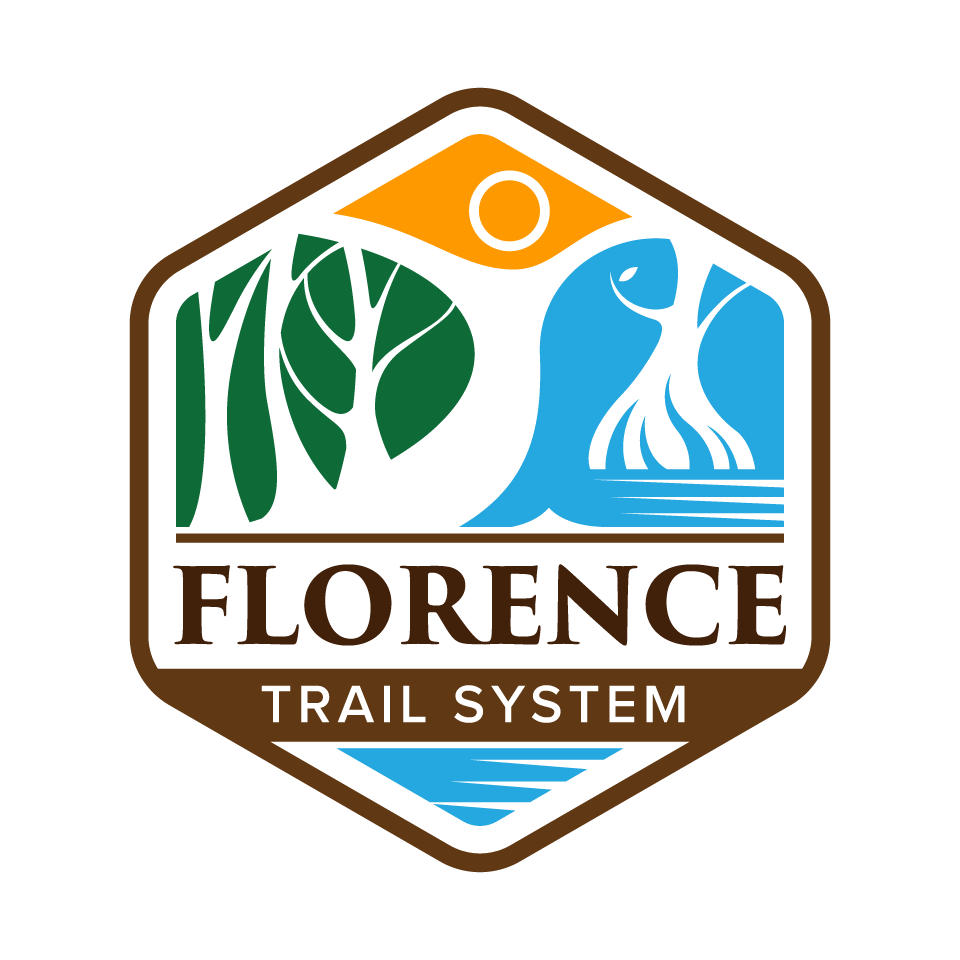 A common thread to the human experience is the search for beauty and opportunities to find tranquility and respite from the complications of life. Aldo Leopold, a leading conservationist from 1920 - 1950, looked to these basic needs and defined conservation as âa way of life in which land does well for its inhabitants, citizens do well by their land, and both end up better by reason of partnership.â Recognizing the importance of partnerships and greenway development, the Florence City Council in 2004, with support of the Parks, Beautification and Leisure Services Commission, established a âvisionâ that provides for the protection of natural corridors and open space within the urbanized area of the City of Florence. This âgreenspaceâ was to follow natural land or water features and link natural areas, parks, cultural features and historic sites with each other for the purposes of conservation, recreation and alternative transportation.

The trail system further provides citizens the opportunity to access environmentally-sensitive land; to better understand water quality issues relative to stormwater; to sense the importance and joy of a healthy urban forest; and to connect to a revitalizing downtown, our culture, our history and our neighbors. 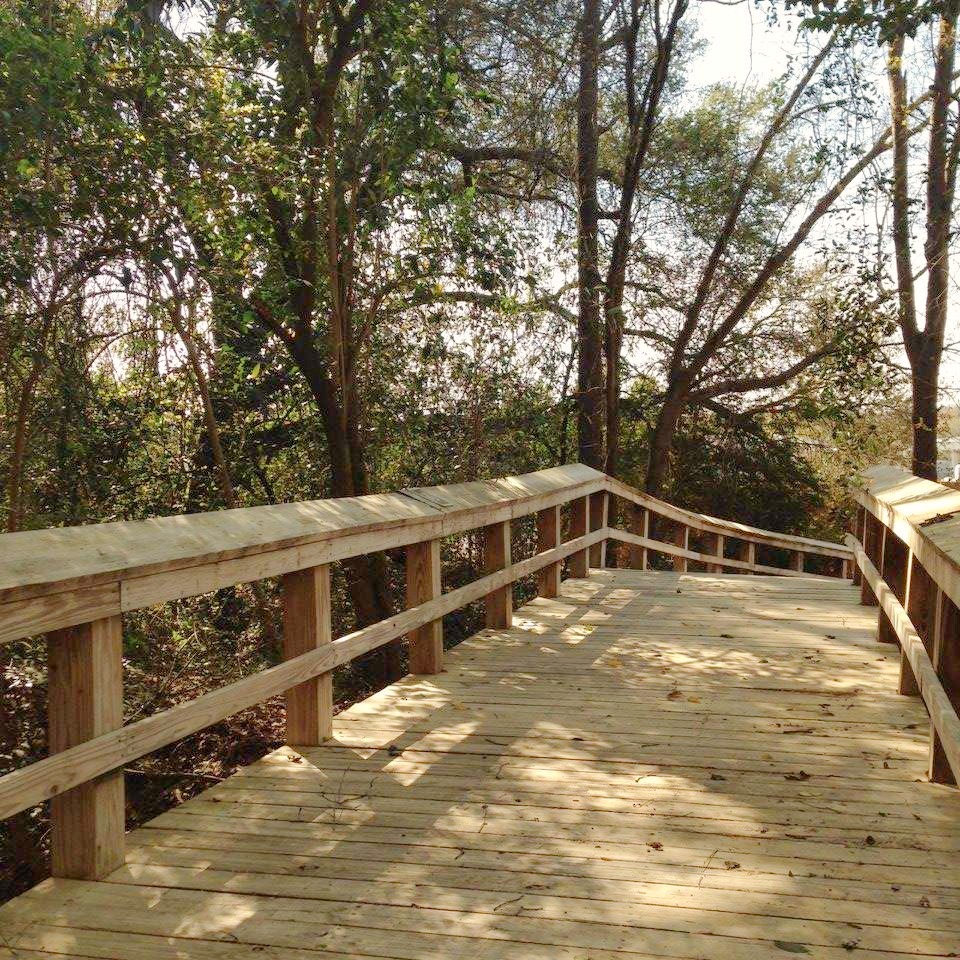 The City’s vision began as connections between places, i.e. parks, land and buildings, and this vision remains the Trail’s central focus. However, as surely as Jeffries Creek runs through it, these physical
connections are expanding to include the concept of a deeper personal appreciation for the natural and physical world and a new opportunity to view the Florence community.


A number of years ago, a multitasked planning committee spoke of Jeffries Creek as a potential “green” necklace around the City. It was stated that the community needed to come together to identify these environmental “jewels” and connect them to form the necklace. While it remains true that the Trail provides connections to and between places, it has become apparent that “connectivity” also includes improved health and wellness, recognition of the natural world and new social and civic interactions.

The Florence Trail System is comprised of three distinct groupings of trails, each with its own identity and complex of features. Each group of connecting trails or “connections” is shown on the map on the opposite side of this brochure, along with information on the features being linked together.

This grouping consists of approximately 10 miles of trails, and provides for individual health and fitness, recognition of environmentally significant areas, opportunities for social interaction in an outdoor environment and introspective experiences. Health and fitness was the primary focus of the original “Rails-to-Trails” facility. Here a hard-surfaced trail provides a venue for personal or group exercise in a pleasing outdoor setting.


An important component of the original Rails-to-Trails was the development of urban transportation modes to supplement the traditional use of vehicular traffic on highways. The first phase of this group of trails, commonly called the Rail Trail, was completed in 2002 and provided the basis for future alternative routes. Alternative transportation opportunities are now provided to the Civic Center, area hotels, restaurants and retail establishments, Lowe’s and Hobby Lobby, as well as West Florence High School and residential neighborhoods.


The Veterans Park Trail, in conjunction with the park, provides unique opportunities for personal reflection or meditation. Partnerships with Byrd Properties, Inc. have enabled the City to preserve a significant block of Jeffries Creek wetlands between the creek and Woody Jones Boulevard. The trail traverses this natural area and terminates at the Veterans Park. At the trail’s terminus, the Veterans Park invites the public to consider the lives and sacrifices of military personnel who served in uniform during the 20th century. 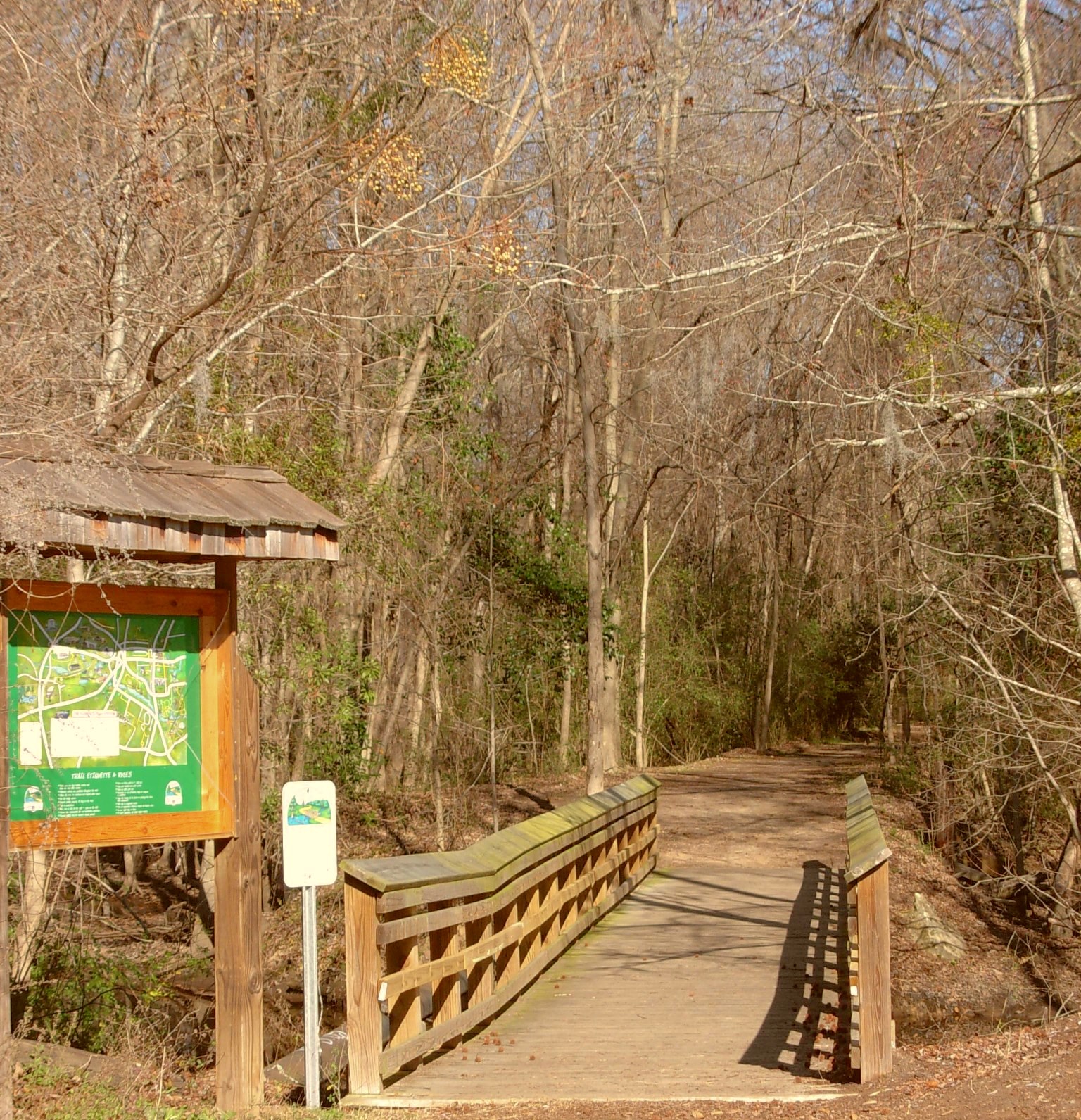 This grouping of urban streetways focuses on the connections of city parks to the emerging cultural center in downtown Florence. The parks, strategically located in residential neighborhoods, provide both athletics-based recreation and an opportunity for urban residents to enjoy walking and picnicking in natural settings.


The downtown areas showcase a renaissance of arts and culture that is symbolized by new buildings and new energy for the Florence Downtown. The Florence County Library relocated to its current site on Dargan Street in 2005. In addition to standard library offerings, a wealth of information is available on the history of the City of Florence, Florence County and the Pee Dee area. The Florence Little Theatre, Florence’s oldest arts-based performance group, constructed a new building and relocated to Dargan Street in 2008. Francis Marion University’s Performing Arts Center, to be constructed downtown, will not only house the University’s new music and arts majors, but will also provide the Greater Florence community with a high-capacity auditorium for cultural events and artistic performances. This premier facility will advance the image of the downtown area and act as another catalyst for future development.

History, education, environmental protection and recreation may be encountered and appreciated along approximately eight miles of these east Florence trails. This connection corridor runs generally north-south,
with Levy Park Community Center located at the northern terminus and an athletics-based recreation facility, Freedom Florence Recreational Complex, at the southern terminus. In between, however, the user will find connections to a wide variety of information and experiences.


Environmental protection is highlighted at two locations – the Pye Branch SWIM project area and the City’s wastewater management facility. At the SWIM project, users can observe environmentally-degraded wetlands which are being restored by the City to a more natural condition. Coupled with the City’s planned wastewater management facility, which is projected to be completed by 2012, the Florence community will share in, and benefit from, environmental technologies that minimize energy use and odors, reduce waste and reclaim stormwater and wastewater. In educational partnerships with organizations like Science South on Jeffries Creek, the community, especially school classes, will be able to gain an appreciation of water management and its communal benefits.


As with the Veterans Park, the Florence Stockade and the adjoining U.S. National Cemetery give the user an opportunity to quietly consider the struggles and suffering inherent in military conflicts. While the Stockade and National Cemetery came into being during the Civil War, veterans from all wars since that time have been, and are still being, interred here. 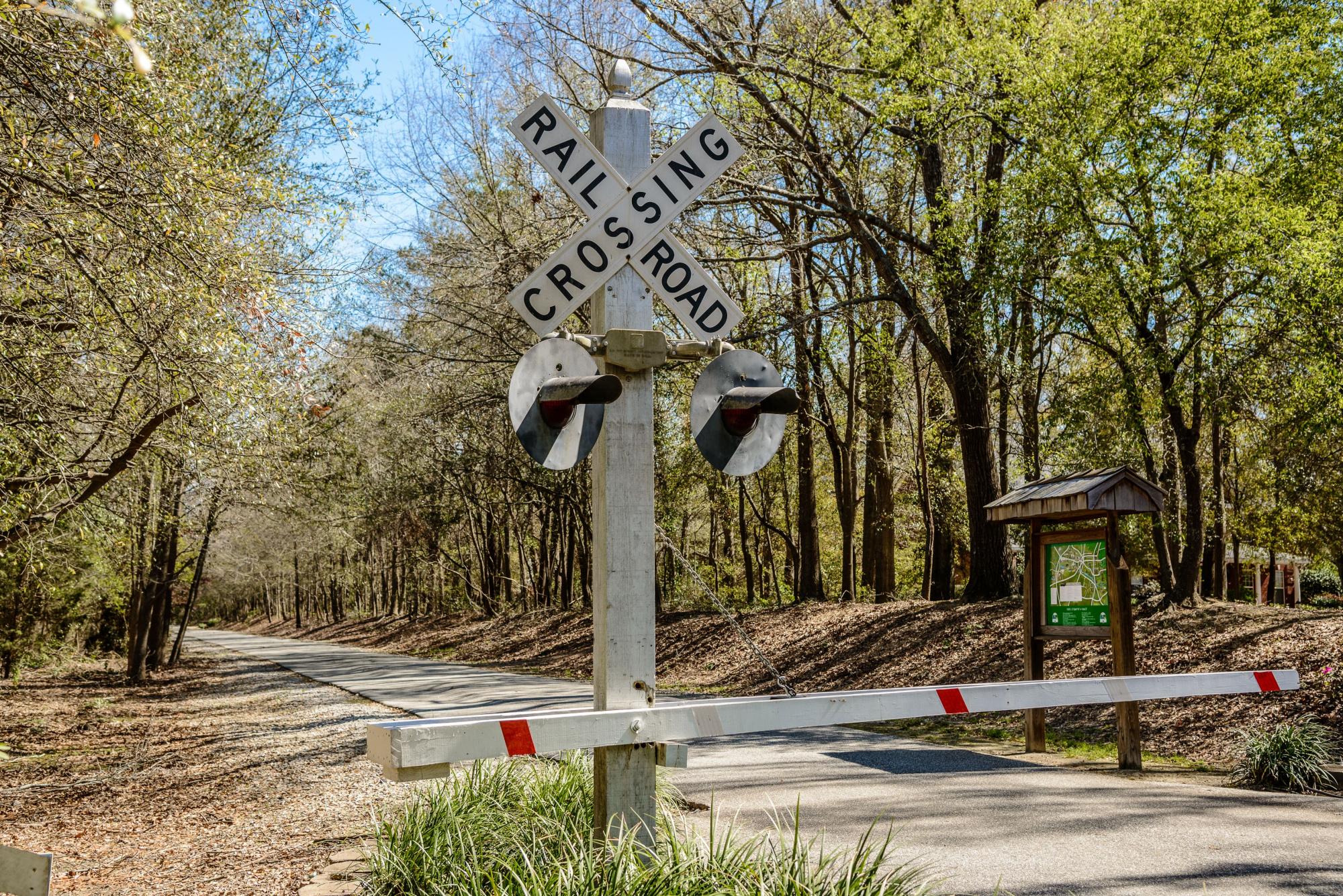 Down the Trail and Into the Future

The City will continue to be active in, and supportive of, land conservation and extension of trails to additional areas. In inventory are three City-owned properties which are not yet connected to the trail system. The Pettigrew Millpond Conservation Area and Middle Swamp Conservation Area are wetland properties located on Middle Swamp. McLeod Park is a developed, recreation-based site located on Jeffries Creek. Incorporation of these properties within the trail system is a future goal of the City. In addition, the City is currently working to improve and better define the urban street trail system.

We caution you not to take these trails and what they provide for granted. Good stewardship is a personal responsibility and we ask that you follow good trail etiquette, keep the trail clean, respect private property and report any concerns to the City. Enjoy, share and experience the Florence Trail System. 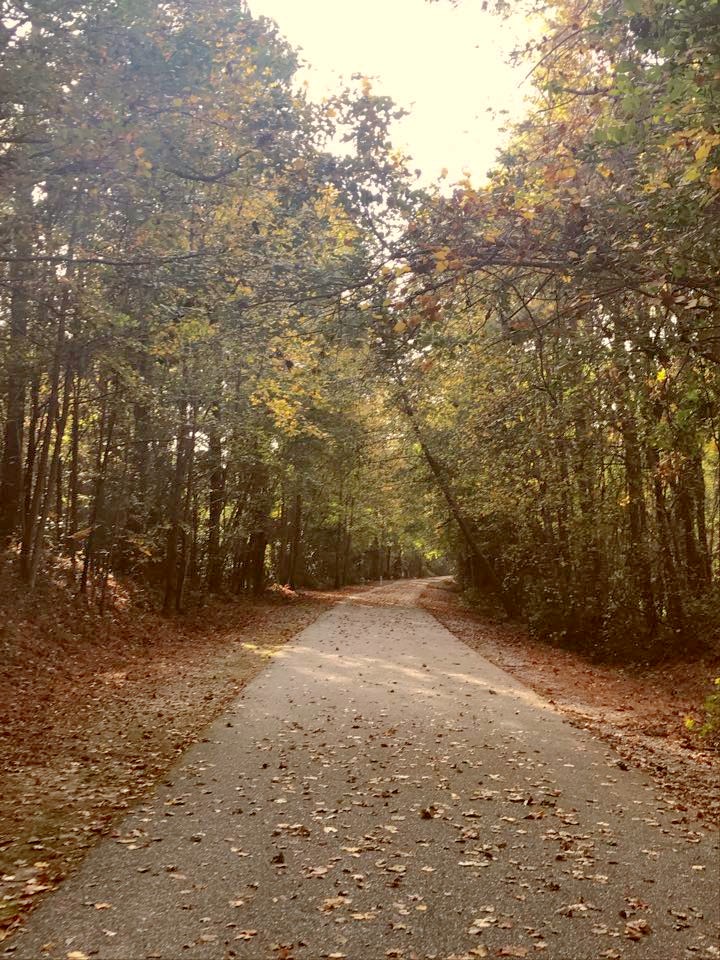 • Trails open one hour before sunrise and close one hour after sunset
• Motorized vehicles are prohibited throughout the trail
• Share the trail, be courteous and respect other users
• Use the buddy system
• Respect private property & stay on the trail
• Yield to pedestrians
• Walk, run or ride to the right – pass on the left
• Helmets are recommended for non-pedestrian activities
• Respect wildlife and let nature’s sounds prevail
• Leave no trace: pack in – pack out
• Keep pets leashed and under control
• Clean up after your pet
• Possession or use of alcohol, drugs or weapons is prohibited
• Enjoy the beauty of all plants or plantings but leave them undisturbed
• Park only in designated areas
• From an appropriate distance, respect all historic sites
• No over night stay or fires
• To report vandalism, call 843-665-3236